Sep 30, 2019 | Benefits of Yoga for Kids, Family, Nutrition and Health, Yoga and Parenting, Yoga for Teens 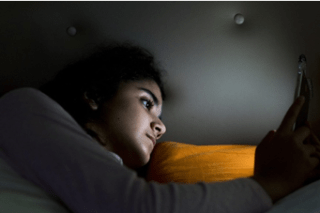 Teens are famous for scrolling through their phone before bed, which can negatively impact their sleep. Many other factors can also contribute to the lack of sleep among teens. According to a University of Michigan study, 43% of parents say their teens struggle to fall asleep or wake up and can’t get back to sleep.  Studies further suggest teenagers need between 9-10 hours of sleep, yet teens average about seven hours or less especially if they are active in after-school activities.

Yoga can help! A recent study showed young adults who regularly practice yoga woke up fewer times in the night – a sign of better sleep quality, in addition to the other positive benefits associated with yoga.

Reasons teenagers are not getting enough sleep:

Ways teenagers can get better sleep:

I find it’s helpful to remind teens that sleep is food for their brain and cannot be replaced. Do not expect to fall asleep right away. It can take up to a half an hour to fall sleep. And practicing just one or two yoga poses is better than none.

Ann Biese, RYT 500, E-RYT 200, RCYT, MBSR-T, YACEP, is an international Yoga Instructor and Teacher Trainer for ChildLight. She is also a Mindfulness and Meditation Specialist in pediatric settings, including Tufts Floating Hospital for Children in Boston, and has taught MBSR and yoga to various youth groups and teen athletes across the country. She has been a featured speaker on meditation and mindfulness in hospitals. Ann is also the author of the award-winning children's book Worry Bee and Mindful Moon. She enjoys volunteering as an instructor for Go Give Yoga and was featured in North Shore Magazine for her volunteer work in Massachusetts. In her time off the mat, Ann enjoys her family and pets, as well as volunteering at an equine rescue farm. View Ann’s video bio here.

Related Links:
How to get Teens to Do Yoga
5 Gratitude Activities for Teens
Seva is “Cool” for Tweens and Teens