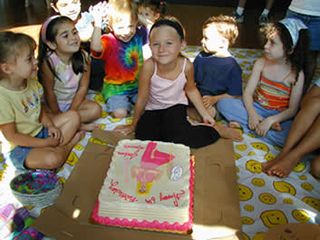 So, you want to throw a yoga birthday party?  Sounds fun!  A yoga party is the perfect way to celebrate the big day with a healthy dose of fun.  If you've been teaching for a while, you'll find a party to be just like class, with only ten times the energy!  You'll have to find good poses and techniques for exerting that energy towards the beginning of the party, so that your guests will be focused and alert when it comes time for yoga games, activities, and of course, cake!

Begin your party with some fun breathing and movement activities, such as flying bird breath.  Some kids will be able to sit on a yoga mat, raising and lowering their extended arms with each breath.  If your bunch is really wild, lead them in flight around the studio, but be sure they fly in a circle, staying close to walls to avoid injuries.

Once the kids have warmed up their bodies and breath, settle into a brief discussion, being sure to recognize the birthday kiddo, and engage him or her in conversation with the other guests.  Easy conversation starters are, "How old are you today," and "How many of you kids have ever practiced yoga before?"  Once the group is comfortable with you, you can introduce the theme of the party, if any, and get stretching.

Many kids ask for a specific theme for their party, based on their current favorite character or hobby.  Here at ChildLight Yoga, we've seen it all!  While princesses and superheros are always popular, lately we've found ourselves designing yoga parties based on specially requested figures, such as Hannah Montana.  If you are asked to host a yoga birthday party and have no idea how to work with the customer's theme, don't panic!  You just need to get a little creative.  Nearly all yoga poses and games can be tailored with minimal effort, especially when you add music, props and creative new names for the poses.

Here's an example of a Hannah Montana birthday party, thrown for a 6-year-old girl and a dozen friends:

Miley Cyrus was nicknamed Miley by her family, who called her "Smiley" as a kid.  For breathwork, we inhale deeply through the nose, and exhale through a wide smile, bringing instant relaxation.

I chose these yoga poses by thinking about the Hannah character, her life as a rock star, and what she means to kids.  Hero pose, Dancer pose, Star pose (various: folded, twisting), Gate pose, Stage (Table) pose.  I added the Warrior series, using the affirmations of "strong," "confident," and "happy," because Hannah is all of those things, and these are qualities any fan would want to emulate.  To inspire some creativity, ask the party guests to invent their own Hannah Pose.  Many times when you are at a loss for what to do, the kids will happily lead the way.

For partner poses, I led the kids into Double Dancer, and followed this by a group pose on the floor.  The kids had to figure out how to form their bodies into the shape of a guitar.  While you might have thought this would be tricky for a group of 6-year-olds, they passed with flying colors.   I took a digital photo to show them how they looked.

There were two options for a game at this party.  First, play Hannah Montana tag, using a pretend microphone as a tagging tool, and the poses learned previously in class as the freezing pose, as called out by the birthday kid.  Kids love to play tag, and what better place than a wide open yoga studio with nothing to bump?

The second game is Musical Mats, which is a variation on musical chairs, only the guests have to stop at a yoga mat and come into the pose identified on the yoga pose card lying on the mat. Play Hannah Montana favorite songs and the kids will have a blast.

To transition to the relaxation phase of the party, ask the kids to lie on their backs in a circle.  By raising their feet in the air and straightening their legs, they will create a birthday cake, and the birthday kid will have to blow the candles out.  Once he or she blows out each candle, the child's legs will come down to the ground, extended along the floor.

Once the children are settled and relaxed, you may invite them to close their eyes and visualize themselves in a daydream.  Lead them in images of various occupations, such as a singer or actor like Hannah, or possibly a doctor, a zookeeper, a firefighter, a teacher, an ice skater, a pilot, etc.

At the conclusion of the visualization, remind the kids that they can do anything they want to do.  Encourage them to Reach for the Stars!

As a Take-away gift or favor, you could hand out sparkly stars to remind them to hold onto their dreams.

Once the yoga practice is complete, you will move on to the more traditional aspects of the party, including food and gifts.  ChildLight Yoga birthday parties always include setting up and cleaning up, as well as serving cake, handing out favors and assisting the parent in any way one can.  We also include party add-ons, such as face painting and other crafts activities.

No matter what you have planned, remember that the kids will have fun, no matter what.  Let go of expectations, make the birthday boy or girl feel super special and enjoy your yoga party! — Amy Bevan

Amy Bevan is a freelance writer, local reporter and host of The PranaMama, an online wellness and lifestyle magazine, and frequent contributor to ChildLight Yoga's blog, The Kids Yoga Resource, as well as certified ChildLight Yoga Instructor and Itsy Bitsy Yoga facilitator.  Amy resides in South Berwick, ME with her husband and two young children.