Yoga and Religion: What we Can Learn from the Encinitas School Yoga Lawsuit 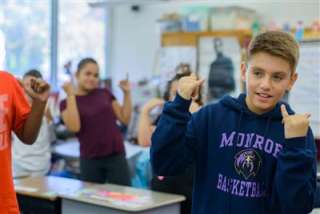 In 2013, the parents of two students at a school in Encinitas, California filed a lawsuit against the Encinitas Union School District (EUSD) claiming that yoga is a religious practice that should not be taught in public schools. The parents were concerned that a EUSD health and wellness program (HWP) that included yoga was in violation of the Establishment Clause of the First Amendment of the Constitution. The first trial took place in June 2013, with a final ruling that the EUSD HWP was not religious. The concerned parents appealed this initial ruling, and the case was brought to the California state supreme court. In April 2015, the state appeals court again ruled that the HWP was not religious.

A few weeks after the ruling, researchers from the University of Buffalo, lead by Catherine Cook-Cottone, Ph.D., interviewed 32 school personnel who were involved with the lawsuit, including district superintendents, assistants, school principals, classroom teachers, instructors of the EUSD HWP, and University of San Diego researchers who were originally involved in studying the program. In August 2017, the results of their qualitative study were published in the International Journal of Yoga Therapy.

The study described a large variety of opinions and experiences of school personnel who were involved with the lawsuit, so a full description of the findings is beyond the scope of this article. However, we want to highlight a few results for consideration by yoga service providers.

First of all, participants were in agreement that the HWP was not religious, however they expressed compassion and understanding about the parents’ concerns, and support of their right to address their concerns in court.

Also, despite the fact that the Encinitas lawsuit received a lot of media attention, it’s interesting to note that very few children actually opted out of the EUSD HWP. According to one health and wellness instructor quoted in the study, only 8 out of around 700 students opted out of the program, primarily for religious reasons. In other words, the majority of parents appeared to be supportive of the HWP.

One topic that came up repeatedly in the study was that there may have been several factors related to the initial implementation of the HWP that sparked parental concerns. Yoga was initially introduced in 2011 to one EUSD school by one instructor. However, the program grew rapidly based on funding received from the Sonima Foundation (formerly Jois Foundation, now known as Pure Edge Inc.). This funding allowed the district to develop a formal HWP and implement it district-wide during the 2012-2013 school year.

Some study participants noted that when yoga was initially introduced at EUSD, it included cultural artifacts, such as Sanskrit language, mandalas, Hindu stories, prayer mudra (i.e. bringing hands together at one’s heart), and a poster that outlined the eight limbs of yoga from Patanjali’s yoga sutras. They shared that while the intention of the HWP was never meant to be religious, these cultural artifacts may have been what sparked initial parental concerns. The EUSD responded quickly to these concerns by removing all cultural artifacts from the school environment, clearly explaining to the program instructors that these artifacts were not appropriate, and giving parents the opportunity to observe the yoga classes, but it’s possible the “damage” had already been done.

The results of this study highlight several key takeaways for those of us interested in implementing yoga in school settings:

1)    Take the time to make sure all stakeholders, including school personnel, parents, program instructors, and students are fully informed and aware of the secular nature of the program. While yoga instructors and some classroom teachers might be excited about the prospect of implementing school-based yoga, and want to do it quickly, not all stakeholders will feel the same way. Read this 2012 article Lisa wrote in response to the Encinitas controversy, for tips about informing all stakeholders, including holding information sessions for parents and teachers, as well as sending information letters and regular updates to parents.

2)    As passionate yoga enthusiasts, we need to ensure we practice what we teach. Yes, we believe yoga offers a secular method to enhance social emotional skills and positive youth development, but we need to be extremely thoughtful about how we are approaching schools and delivering programming. While Sanskrit language, mandalas, and prayer mudras might be so common in our lives that we don’t perceive them as anything out of the ordinary, we need to be mindful of the fact that it is practically guaranteed that school community members, including parents, will have experiences that are different from ours. Despite our innocent intentions, including cultural artifacts can actually prevent some students form accessing yoga which is opposite of our intentions. Respect, compassion and non-attachment are essential.

3)    Another key takeaway is the importance of transparency about the origins and funding of your school-based yoga program (if it receives outside funding). While most school-based yoga programs are not funded by external sources, the EUSD HWP received funding from, and was developed by, the Sonima Foundation, which was formerly known as the Jois Foundation. According to the Jois Yoga website, Jois Yoga “is an institute set up to impart the traditional Ashtanga philosophy and practice developed and taught by Sri K. Pattabhi Jois in Mysore, India since the early 20th century.” Note that the Jois Foundation is not alone in this – other school-based yoga programs, such as Kripalu Yoga in the Schools, are also supported by organizations that have ties to traditional teachers and practices from India. These types of funding situations are the minority, however it is important to be aware of and transparent about the origins of the program that you are teaching. No matter how far removed the school-based versions of these yoga programs are from the traditional origins of these organizations, any parent who does a bit of online digging has the potential to become concerned if these ties are not made transparent from the beginning. In other words, these types of collaborations need to be made clear to parents and school personnel upfront. The most crucial piece here is to provide information explaining that the school-based versions of these yoga programs have been developed in secular ways that are not associated with any particular religious practices or beliefs.

4)    It’s important that we recognize that controversies and lawsuits such as the Encinitas case can and will be sensationalized by the media. One small error in judgement while teaching yoga in a single class in a single school can be cause for that program to be completely shut down as we’ve seen take place in various instances around the country in recent years. When the media creates a stir, well founded or not, it creates fear which can, and has, negatively affected the current and/or planned implementation of other quality yoga and mindfulness programming in other schools/districts. We have experienced this negative phenomenon first-hand by having had a district-wide contract rescinded before the program even started due to fear caused by media attention generated from a single parent in single school who took offense to a classroom teacher leading mandala coloring and using the term, “Namaste,” with her students. These are seemingly small incidents that can lead to tremendously negative consequences, not just on individual schools and programs, but on the yoga in schools movement as a whole.

5)    Finally, it's important to keep to the science. Be clear about the reasons why you want to implement a school-based yoga program in the first place. Rather than being a stealthy way to spread religious doctrine, school-based yoga really does help kids. There are several scientific reviews and rationale papers that you can offer your district personnel and parents that explain the stress managing and self-regulating affects of yoga. For a comprehensive reference list of peer-reviewed research on yoga and mindfulness for youth, check out the Yoga 4 Classrooms supporting research webpage.

School personnel at EUSD did the best they could under difficult circumstances, and now it’s up to us to learn from their experiences. What can we learn? In a nutshell: full transparency is necessary, from all angles, before you implement yoga in a school. Go slow and understand the best practices for what and how you are teaching so that you don’t end up with issues later on. Implementing school-based yoga in a mindful, conscientious way will help ensure that students and schools across this country and others have access to programming that has the potential to support social and emotional learning, health and wellness, and positive school climate.

Bethany Butzer, Ph.D. serves as research advisor for Yoga 4 Classrooms. Bethany received her Ph.D. in psychology in 2008 from the University of Western Ontario, Canada, and she recently spent 2.5 years as a postdoctoral research fellow at Brigham and Women’s Hospital, Harvard Medical School, where she studied the effects of yoga in school settings. Bethany is also an author, speaker, researcher, and yoga teacher who helps people create a life they love. Learn more at www.bethanybutzer.com.

Lisa Flynn is founder and CEO of ChildLight Yoga and Yoga 4 Classrooms, author of the Yoga 4 Classrooms Activity Card Deck; and Yoga for Children: 200+ Yoga Poses, Breathing Exercises, and Meditations for Healthier, Happier, More Reslient Children, contributor to Best Practices for Yoga in Schools, and sponsor of the free Research Repository: Yoga, Meditation and Mindfulness for Children, Adolescents and in Schools which she developed with Bethany. Lisa contributed to the first published research study to use subjective and objective data to examine the acute and longitudinal effects of a school based yoga intervention in young children. Learn more about Lisa here.

*This article was re-posted with permission from the Yoga 4 Classrooms Blog.