Twenty Kids all Focused and Calm

“Do you really think you can get 20 kids to focus at one time?” a staff member remarked on the morning of Field Day as I walked down the hall in my yoga clothes, ready, yet a little nervous for what the morning would hold. “We’ll see!” I smiled tentatively… 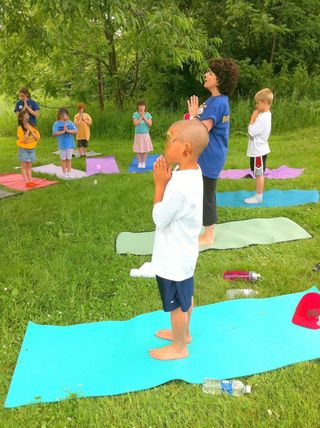 What potential chaos would ensue, I thought, as I tossed and turned in bed imagining Kindergarten kids out of control on and off their yoga mats, fifth graders flailing around, laughing at the poses I modeled up front, refusing to follow my lead. As my nightmarish reverie continued on I felt the harsh glare of unhappy teachers as they whispered and wondered, "What in the world was this woman thinking?" And then as I lay in bed half-frozen in self-doubt, on the verge of looking up the PE teacher's phone number and calling him right then and there (around midnight) to cancel, something settled over me. And with the ease of a high-flying and carefree seagull soaring through the air on a sunny summer afternoon I thought, "I'll do it." "Move into the fear," I laughed at myself as I decided to just do it!I am an elementary school teacher. I teach yoga to small groups of kids after school in the music room of the school I work in. Last winter, for reasons that can only be chalked up to a serious brain cramp, I offered to teach yoga to all the kids in our school during our upcoming Field Day. Field Day. It's the one day of the year that blue and gold battle for 4 hours as kids compete by kicking, skipping, running all the while wearing either a blue or a gold T-shirt. Why on earth did I offer to teach yoga, the most noncompetitive physical activity you can teach kids, on Field Day?

When the PE teacher approached me two weeks before the event and I confirmed, "Sure, I'll teach yoga to every student in our school. You say two-hundred plus kids? I'm happy to do it!" I should have, instead, politely backed out. When he went on to explain that I'd be teaching brief, ten to fifteen minute yoga sessions one after another to individual classes of between fifteen and twenty-four kids in grades K-5, I should have suddenly "remembered" the root canal I had scheduled that very day. The largest kid's yoga class I had previously taught was 8 students. Why shouldn't my next step be to teach an entire school?

"Just have fun," the PE teacher attempted to calm me down. "No stress," he emailed me. I had to laugh. The PE teacher was telling the yoga teacher to have fun and not stress. "I can do that," I emailed him back, hoping my own words would inspire me with confidence. "Move into the fear," I once again advised myself, all the while crazy excuses ran through my head. "My dog aspirated a chunk of her dog food while we were playing "dog bowling" with little bits of dog food in the garage (this actually did happen once!). I have to rush her to the vet," I envisioned myself telling the PE teacher, apologetically, an hour before Field Day. "Sorry, I won't be able to teach yoga!"

By the time Field Day rolled around, however, I felt as ready as I was going to be. I had made one-hundred-ninety cute little yoga pins with the help of my supportive husband. I had borrowed twenty colorful yoga mats from four different staff members and carefully noted which purple mat belonged to which staff member. I had run through my ten-to-fifteen-minute yoga routine sixty-seven times with my inflexible husband, my gracious yoga teacher buddy, and my loyal, slightly bored, dog. And I appealed to two of my colleagues who I knew could handle challenging student behaviors. Fortunately for me, they both agreed to help with crowd control, even though one of them had never taken a yoga class in her life. If mayhem descended over my well-planned, albeit brief yoga sessions, at least I'd have witnesses to vouch for the fact that I did try really, really hard to create a calm, positive space amongst the frenetic and competitive energy of Field Day.

And so, with the sun gently shining on a beautiful spring morning, and all our yoga mats carefully laid out in a colorful half-circle under the cool shade of a giant oak tree, I taught yoga on Field Day. "Can you teach my fifth graders yoga during one of the water breaks?" a teacher asked me in the confusion of things getting started. "Sure!" I answered not really getting the fact that I was already scheduled to teach yoga to grade two at that very same time. As the second water break was announced over a screechy megaphone, thirty-five grade school students congregated under that oak tree.

With a very deep breath in and a "here we go" attitude, I announced with the authority of a conductor waving her baton as she directed her first symphony orchestra, "Stand in mountain pose and clasp your hands like this." And to my amazement, they did. With feet grounded in their mats and hands clasped together about the level of their sweet little hearts, this giant group of elementary-aged students appeared as peaceful as the morning sun over a calm and quiet lake. And, I was starting to have fun.

And instead of teachers glaring and questioning my sanity, many sat right down with the kids and began bending and twisting as I demonstrated Downward Dog and Warrior I. Several were shocked as their students stood peacefully and still, slowly breathing in and out. "Maybe you can try this in your classroom," I offered to several teachers who I knew might be able to get their inattentive and even rowdy students to focus back in the classroom with calm, rhythmic breathing and a few yoga poses.

As one group disassembled and moved on to the water toss, their teacher smiled and whispered to me, "This is your calling." Several teachers said that our yoga station was their student's favorite activity of the entire, competitive morning. And for one sweet, shy little girl, who had been in my after school yoga class before, our yoga station was the only activity she participated in on Field Day.

"Do you really think you can get 20 kids to focus at one time?" a staff member remarked on the morning of Field Day as I walked down the hall in my yoga clothes, ready, yet a little nervous for what the morning would hold. "We'll see!" I smiled tentatively.