The Carpool: What’s really stressing our kids out? 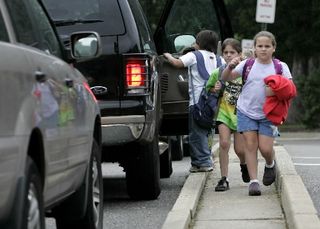 It’s 6:55 on a Friday morning.  It’s one of those unkind days in March, when the sky is spitting rain and snow and sleet – all at the same time.  Especially cruel after sun and 65 degrees just yesterday.  We are not a family of early risers, so dragging out of bed in the pre-dawn hours to get everyone off to school and work is not easy thing to manage.  Still, we try to keep it low-key and pleasant – a heroic effort to help everyone ease into the day.

This morning was a little different from most.  Many months ago, we managed to find our way into a carpool for my daughter – earning us 20 extra minutes in the morning (a significant gain and one we celebrated by recalibrating our alarm clocks).  One of the mothers did all of the driving, in order to alleviate her own daughter’s anxiety about school.  Her daughter just seemed to do better when she drove, and so the pattern stuck.  This particular morning she had asked me to drive, so she could attend an early meeting at work.

So, at 6:55, we hauled out the door, into the car, and off to pick up the other girls – three of them all together, all of them friends from birth.  Having grown up in the same neighborhood and gone through elementary school together, they were now scattered about town and separated into different pods at school – yet still bound together by the morning carpool.

As I drove I did what I like to do most – listen.  One of the girls was helping another with a last run-through of her spelling words before the weekly test.    There were quiet comments about one thing or another – pleasant chatter – one of the girls expressing regret that she’d forgotten her “anxiety tea” (in her words), which she needed to keep her stomach settled on  school days.

When we pulled into the school drive, the girls sprang into action, collecting backpacks and other assorted items, like they needed to scoot out of town before the posse arrived.  I was a bit dazed by all the fuss and tension, until, as we crept forward in the line of cars, it was their turn to disembark.  Doors flew open, the girls frantically grabbing various sacks and bags, one of them trying to gather an oversized project due that day.

Not 10 seconds after I hit the brakes, the carpool attendant lunged toward our car:  “Hurry, hurry, hurry!  Go, go, go, go, go!”  he yelled in the girls’ direction – irrespective of the fact that there were three of them sliding across seats, trying to come to their feet under the immense burden of overloaded backpacks and one oversized project.

I’ve never seen three girls move so fast in my life – and with such panic in their eyes.  What a way to begin the day!  All of that effort to see my children off to school with calm and love – for this?!  Suddenly so much became clear.  For many years, I’ve been trying to figure out why children are so anxious.  What is it, exactly, that has them so stressed that some days they can barely function?  Is it video games, mass media, exposure to violence? Yes, Yes, Yes. Overscheduling, lack of down time?  Again, yes.  But it’s also adults.  We, too, have to bear the responsibility of this epidemic of stressed children.

Children staying up late studying, drinking “anxiety tea” in order to make it through a day of school.  Have we become such an assembly line, mass-producing educated children that we can’t say “hello” at the beginning of the day, or pause to consider extenuating circumstances when three girls can’t evacuate a car in 8 seconds or less?  Are we so caught up in our own responsibilities and anxieties, that we hurl expectations at our children without offering the support they need to complete the tasks?

It seems, in our mad rush to stay on top of our lives – to prosper at work, to have a clean house and maintain our gardens, to honor volunteer and social commitments and ferry our children to every activity offered on the face of the earth – could it be that we’ve forgotten what raising children is all about?  Have we forgotten it’s our greatest task and pleasure to lovingly and supportively share all that we know, so that one day they’re prepared to take on the mantle of responsibility that comes with being an adult?

And I’m not just talking about parents – I’m talking about teachers, bus drivers, friends, neighbors, scout leaders, mentors of every type.  And yes, carpool attendants.  Perhaps, as adults, we’re trying to do too much, and in doing so, we’ve lost our sense of priorities.  I understand – I truly do – that those carpool attendants have just 20 minutes to get 500 children out of their cars into the school.  It’s a monumental task.  Goodness knows I wouldn’t want to be responsible for it.  But if the net result is a building full of shell-shocked kids, then maybe the system doesn’t work.  What is it all about after all?  Is it about having everyone in his seat by the stroke of 7:23?  Or is it about nurturing the next generation?