My Son Has ADD: Part II 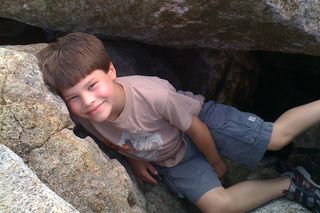 Yesterday I read, We are less willing to let boys be boys in the classroom, and saw our own story in that article.  It actually reminded me that I needed to write a follow up to a post I wrote last summer: Yoga and Parenting, Part I:  My Son Has ADD.  At the time, my husband and I were on the edge as to whether or not to medicate our then 6 year old son.  After all, we had been told by the doctor, that not medicating Jack would "be like withholding insulin from a diabetic."  (Yes, that's an actual quote.)  Many, many people responded to that article – many who were either going through the same thing or something similar.  And, many of those people have followed up since then to find out how Jack is doing.

I'm happy to say, Jack is doing great.  We chose to work with a Naturopath, who after several meetings, blood and saliva testing, determined what we had assumed as well.  Jack is an anxious boy, and many of his behaviors were a reflection of that.  It was also determined that he has an allergy to dairy and eggs (like his mom).  Dietary changes and natural supplementation almost immediately made a difference in his his ability to sleep soundly.  Not surprisingly, his general mood improved as a result.  After a few months, more blood testing was done, and the supplements changed slightly.

Jack started 1st grade and has a wonderful teacher.  She understands him, and enjoys his sense of humor and compassionate ways.  She gently reminds him when his behavior is inappropriate but without shame – a hand on the shoulder, a turn of the head is all it takes.  Jack, like most kids, does not want to get into trouble or cause issues in the classroom.  He is beside himself when he feels has done something wvrong.  In of itself, that produces a great deal of anxiety, which causes behavioral issues, and so it goes on.  We as parents, along with his teacher, better understand this cycle, and have worked with Jack to give him the tools necessary to combat the anxiety.  Just a couple of nights ago, I found Jack in his room doing Balloon Breaths to help him fall asleep.  Last week, he mentioned that when he gets frustrated with his sister, it can help to go outside for a few minutes.  "Then, I can really cool off, Mom!," he said.  As he gets older and more mature, our hope is that he will come up with additional tools of his own.

Getting back to the article in yesterday's Atlanta Journal-Constitution: We are less willing to let boys be boys in the classroom.  It's a bit of a backlash against the quick to medicate mentality that is so prevalent these days.  Here are a few interesting excerpts:

Anthony Rao, co-author of the new book “The Way of Boys: Raising Healthy Boys in a Challenging and Complex World,” wishes everyone would take a deep breath, slow down and realize that boys follow a rocky development path that may include troublesome behaviors.

“Most boys will grow up healthy,” he says. “When parents are too worried, they jump to conclusions that something serious may be wrong and focus exclusively on problems.”

Today, normal developmental phases can be misread as disorders by classroom teachers. Then, their inexpert diagnoses are too quickly confirmed by pediatricians in 15-minute office visits. Parents leave the doctor with a prescription in their hand and a label on their child.

"We used to miss a lot of learning problems in boys years ago,” says Rao. “But now we are looking so aggressively for them and we are looking earlier and earlier.”  The problem, he says, is that reliable assessments are difficult in boys younger than 6 or 7.  That’s why Rao recommends teachers, pediatricians and parents delve deeper and wait longer before applying labels and adopting such interventions as special education services, medications or class pull-outs for young boys.

The checklist for disorders — impulsivity, delays in socializing and language, resistance to eye contact, problems in transitions, extreme shyness, sudden fits  — can also be a checklist of temporary development phases and setbacks, cautions Rao.  “Rather than rushing into a program to help troublesome behaviors, many boys benefit from a wait-and-see approach.”

This early pressure on boys to conform, a lack of free play and a surge in structured activities could explain why so many 23-year-olds are living in their parents’ basement.  “One could make the case that pushing their development so fast is leaving boys burned out and exhausted,” he says.

His solutions are basic; don’t push boys into competitive sports where dropping the ball brings not only personal disappointment but the disdain of teammates. Instead, Rao advocates that parents let boys try individual sports, such as martial arts, tennis or swimming.

Give high-energy boys a chance to release energy by letting them run around the house or out in the yard before school. In class, restore recess and give young kids 10-minute stretch and walk-around breaks every hour.

“Girls use more words. They are heavy on reading and early literacy and more social cooperation,” he says. The boy brain is wired for motor skill development and spatial tasks, and boys learn more by touching and exploration. (There are exceptions, he says, describing himself as a compliant learner eager to do what the teacher wanted.)

Today’s classroom is better suited for the ways girls learn, says Rao. “When you promote all this assessment and increasing standardization, you narrow the way you are going to teach kids, eclipsing the ways that boys learn better. You go to much less hands-on and manipulation of objects and to more sit down and lectures.”

Rao concedes that it’s possible many boys he treated would have outgrown their extreme shyness or belligerence without his assistance, but their parents were desperate for help.  “Statistically speaking, most of them would have done fine, but their moms were anxious and worried,” he says. “My role was to help them get through it so they were not suspecting that everything their sons did was a problem and then creating self-fulfilling prophecies.”

Of course, I can relate to so much of what Rao is quoted as saying in this book.  At 3 and 4 years old, we tried to put Jack in an organized soccer program. Two years ago, it was T-ball.  This fall it was football.  He tried to tell us he didn't want to play – and truly, it brought out the worst in him.  Looking back, I can see that he was so afraid to be put on the spot, that he would create diversions with inappropriate behavior. My husband, who was a star athlete in his younger years, admittedly had a difficult time understanding that his son is DIFFERENT than him.  But, he's coming along.  He loves that little boy more life itself.  Half way through the football season, my husband, who was coaching, finally decided it was time to quit pressuring Jack to play.  They both 'quit' together.  The next week, Jack asked to go back.  The thing is, he enjoyed the game, but he also needed to know that it was okay not to.  It was a great lesson for both of them. Since then, they've established a trust and a bond between them that literally brings tears to my eyes.

The foundation of trust, safety and unconditional love is not only necessary to social/emotional development at home, but also at school.  In the article, Emotional Intelligence, The Missing Piece,  emotional intelligence is described as "the capacity for recognizing our own feelings and those of others, for motivating ourselves, and for managing emotions well in ourselves and in our relationships." Or, as Maurice Elias, Rutgers University psychology professor, puts it, "It's the set of abilities that helps us get along in life with other people in all kinds of life situations." He calls it the "missing piece" in American education.

I would agree with that, though I do feel the pendulum of American education is finally swinging in the direction of educating the whole child; mind, body and spirit.  Programs focused on character development, mindfulness education, Yoga 4 Classrooms and others, provide teachers and students the means to develop crucial social and emotional skills, while reducing anxiety, stress and aggressive behavior.  A parent or educator who takes the time incorporate this learning, is creating a safe space for kids to feel they matter, can be themselves and feel appreciated.  To me, that is the most crucial element.  Kids who feel unconditional love and acceptance want to do good, act appropriately, and with compassion, if they are able.  They become emotionally intelligent.

As a parent and educator, I'm grateful to see how this works in real life.  For me, it's much more than a bunch of neat words and ideas on paper – in posts, articles and books. It's my yoga journey.  Surrender and acceptance, contentment, reflection and self-transformation, and LOVE as the basis for all of the above.  I see it in action at home with Jack, working at school, and in my classes. And it has informed the philosophies behind the ChildLight Yoga Teacher Training, and the development of the Yoga 4 Classrooms program.

Let's let our children be children, while supporting their social and emotional development.  It can be done. I look forward to the ongoing journey and the lessons within – for me, our schools, and most of all, for our children.