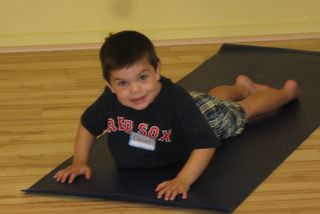 Here in the business of yoga for kids, we're pretty used to laughing and being silly.  So when we hear kids giggling at the sound of their own voice, it's wonderfully entertaining, especially when they're having so much fun pronouncing a word so near and dear to our hearts. After all, "yoga" is a super-fun word for anyone to say!

While yoga is becoming wildly popular with kids everywhere, one significant benefit often overlooked by parents and educators is the aspect of speech development.  ChildLight "Yoga," "yogurt," or "woga" classes can help advance a young child's speech development through slow, repetitive verbal instructions, songs and the imitation of simple sounds found in nature.

Children with speech delays are often more physical in nature, especially boys.  A movement class like yoga can pair physical motion with repetitive sounds, which will likely catch their attention more so than a simple quiet conversation.

For example, a toddler who has not yet mastered letters like S and Z, will enjoy slithering like a snake, not only attempting to "hiss," but watching all of his classmates' mouths as they hiss and lower themselves to the ground in snake pose.  After repeating this pose at home or in subsequent classes, the boy will immediately recognize the word and sound which goes along with the pose, and hopefully he will gain the confidence to say it himself.

Children who need extra support in learning speech patterns benefit from slow and exaggerated speech demonstration.  To an adult, this type of instruction seems silly, but if you think about popular children's characters like Barney, Elmo and Dora the Explorer, all of these characters speak this way to their audience, and kids respond favorably.  In our younger classes, ChildLight Yoga instructors repeat, repeat, repeat and speak very slowly.  One pose, such as "So Big," is repeated at least five times with slow physical and verbal demonstration.  Even if kids don't respond in class, they are visually taking in the cues, both auditory and visual, from their yoga teacher.

ChildLight Yoga's own Heather Warr, an instructor and twenty-year pediatric speech pathologist, says breathing is key, because we speak on the exhale.  "If a child doesn't have enough breath support, he'll not have enough air to formulate speech sounds which require sustained airflow like /s/, /z/, and /th/," said Warr.  "We work on correct postures for maximum rib expansion for volume and length of expression."

Here's an idea for teachers or parents who wish to use yoga to support a child's speech development.  "Poses that start with the same sound are excellent for speech development," said Warr.  "The child can hear the beginning sound of a pose and group them as such.  For example, boat, butterfly, bee all start with B!  The child can practice this sound as they are doing the pose."

Many thanks to Heather Warr for sharing her knowledge and ideas on the topic of speech development. — Amy Bevan