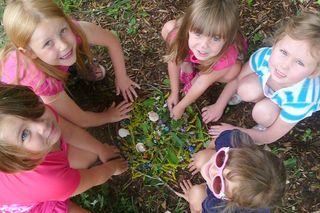 Mindfulness, the practice of developing focused awareness of the present moment without any judgement, has been shown to provide a number of postive benefits to children including improved focus, resilience, and prosocial behavior. Summer’s remaining days provide the ideal setting to teach children simple mindfulness practices including child-friendly meditation (focusing) practices, breathing exercises and yoga postures. The ability to turn to these healthy practices as needed helps children ultimately do better at home, at school and in life.

Janine Bibeau, a kindergarten teacher at Portsmouth’s Little Harbour School who is a certified ChildLight instructor, suggests the following engaging mindfulness activities to be enjoyed outdoors.  If you are not already familiar with sharing yoga with your children, pick up a portable reference such as Yoga for Children: 200+ Yoga Poses, Breathing Exercises and Meditations for Healthier, Happier, More Resilient Children or the Yoga 4 Classrooms Activity Card Deck.

Nature Mandala: Whether in the woods or at the beach, have kids gather whatever natural objects they find that appeal to them such as small pinecones, shells, rocks, sea glass or flowers. Once they have enough items, encourage them to take the time to consider which ones to choose and where to place them in a circular pattern on a flat spot. The act of mindfully walking in and out of the circle, and placing the objects in a circular pattern helps children to focus into a quiet, relaxed state while they connect with the creative parts of their brains and themselves. They can create a Mandala on their own, with other children or with you. Working together in a group promotes a sense of community and belonging. If a rainy day keeps children inside, they can make a Mandala using colorful household items such as an assortment of dried beans, ribbons, buttons, pieces of colorful paper or strips of fabric.

Camp Fire or Candle Gazing: To help children unwind after an action-packed day, have them sit comfortably in front of a battery-operated votive candle or a safe distance away from the flickering flames of a camp or beach fire. Encourage them to concentrate only on the flickering flames for 10 to 30 seconds. Watching the flames is mesmerizing and will take them into a deeply relaxed state. With practice, encourage and your children to focus their eyes on the candle or flame for longer periods of time. Feel free to time them – they love the challenge!

Flying Bird Breath: If children need to calm down, ask them to stand up tall and strong with their arms at their sides and feet about hip distance apart in Standing Mountain Pose.  Have them imagine they are a beautiful, strong bird. Ask them to prepare to fly by opening their wings (arms) out to the side, palms facing up while breathing in slowly and then to start to fly by continuing to inhale as they reach up with straight arms to touch their palms together above their head. Ask them to slowly exhale while lowering their wings (arms) down to the sides of their bodies, palms turned down. This up and down flying motion should be repeated several times in a steady fluid motion that is in sync with their breath. Children can close their eyes while “in flight” and imagine seeing all kinds of things while soaring freely in the sky. This is a wonderful transition activitiy as well – if you are a teacher try guiding them down the hallway while practicing Flying Bird Breath.

There are many nature-inspired yoga poses that you can teach your kids including the Shark Pose, Tree and Frog. Once they know a handful of them, there are several fun games they can play at the beach, pool or playground or in a field or garden. 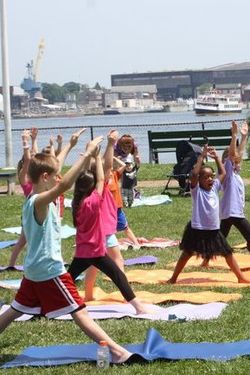 other players’ towels to prevent them from overlapping.  Either place or have the children place a yoga pose card or photocopied yoga pose on each towel. Start playing music at which time the players should start dancing or marching around the area with the towels. When the music stops, the players must do a yoga pose that is on the towel closest to them. Ideally, repeat until the players have gotten to do all or most of the yoga poses.

Yogi Says: This game can be played on land or on a paddle board. Children select who will be the “Yogi.” The “Yogi” has the other players line up the group across from her about 10 to 20 feet away. The players must do the yoga pose the Yogi tells them to do if she first says, “Yogi says.” If players follow an order that doesn’t begin with “Yogi says” they are out.  The game is played until one person is left. He is “Yogi” during the next round.

If you are interested in learning more about ChildLight’s programs, please visit www.childlighteducationcompany.com.

Janine Bibeau teaches yoga and mindfulness to her kindergarten and ChildLight Yoga students all year round.