Food, Mood, Behavior and Learning: What are You Feeding Your Kids This Year? 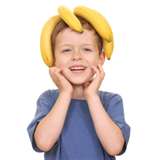 Food has an effect on the body, and therefore there is truth in the saying, “You are what you eat.” This is especially important to note in regards to what children are eating while they are growing and learning.  Having said that, I can recall many times at my house when hotdogs were served to the young children while the adults enjoyed a homemade meal.  Sound familiar?  Yikes.

Overprocessed foods are unfortunately the norm today and we are all paying for it, but kids are suffering the most.  They are more obese, more ridden with disease than ever before. And, they are increasingly being diagnosed with ADD/ADHD, allergies and related afflictions.  Coincidence?  I don't think so.  (Watch for a follow-up post to Yoga and Parenting, Part I: My Son Has ADD, regarding our success with diet changes to address his diagnosis…)

Fortunately, many communities and families are trying to make some changes – buying local foods, planting gardens, educating themselves about nutrition. But making these changes can prove difficult or impossible for low-income families.  First Lady, Michelle Obama, is expressing her concern about this issue and has taken to spolighting childhood obesity and nutrition around the country.  Many wonder how involved the government will become.  In a recent article, Forbes Magazine predicted the following for 2010:

Childhood nutrition will become the cause célèbre. Michelle Obama's signature issue has garnered a lot of attention thanks in part to troubling childhood obesity rates. Advocates for improved nutrition also see an opportunity in the reauthorization of the Child Nutrition Act. The legislation, which is revisited every five years, is overdue for congressional review and will likely spark heated debates over what role government has in providing children with healthy food, particularly while they're at school.

Should be interesting to see what happens with that.  But even without government intervention, this is much we can do to improve our eating habits.

Ayurveda, the sister science to Yoga, provides a fairly simple guideline for healthy eating. Ayurveda categorizes most foods as either balancing (sattvic), stimulating/agitating (rajasic), or dulling/energy-draining (tamasic).   Even if you don't know anything about Ayurveda, you have probably noticed that certain foods change the way we feel and behave.  What we put into our mouths has a direct effect on our emotional and physical well-being.

For example, a child who eats a processed food item, filled with sugar and additives will have done himself a major disservice in terms of having the physiological ability to quiet his mind and body for optimal learning in the classroom.  This may seem obvious, but did you know that old or preserved foods with little nutritional value will actually zap your energy?  Imagine the energy level of a child who eats packaged chicken tenders and instant potatoes for dinner, followed by a sugar-laden, chemically sweetened and colored ceral in the morning, and a squeezable yogurt for mid-morning snack.  At first glance, these foods are harmless and could even been miscontrued as balanced.  After all, the packages say they are.  But not one of the above listed foods is 'living', therefore lack vital nutrients necessary for optimal body and brain function.  In fact, these foods could create dangerous fluctuations in blood sugar levels, potentially causing both physical and emotional highs and lows (not to mention diabetes over the long-term).  If you've ever seen a child eat cake and soda, become very hyperactive, then collapse into a tantrum later on, you will know exactly what I'm talking about.

Essentially, there are 3 main goals to healthy eating from a yoga and ayurvedic perspective:

1)  As much as possible, avoid sugar, caffeine and saturated fat.  These would be found in foods like coffee, soft drinks, red meats, packaged snacks, most refined food products, etc.  These are the stimulating, or rajasic, foods.

2)  As much as possible, avoid artifiical coloring and preservatives and food that is not fresh.  These are energy-zapping, tamasic foods.

3)  As much as possible, do eat whole, fresh foods.  Those are foods grown from the earth or taken from the animal, and are still relatively intact.  If possible, organic, local food choices are best as the vitamin and mineral content is maximized while the potential chemical contamination is minimized.  These are the balancing, or sattvic food.

Shoot to follow the 90/10 (even 80/20 is pretty good!) rule, which allows for some flexibility.  This is having the goal of eating mostly whole, fresh, sattvic foods about 80-90% of the time, while allowing for an occasional treat the other 10-20% of the time.

My goal in 2010 is to do a much better job of following these guidelines for myself, and especially for my children.  What about you?  What are your thoughts?

For some great ideas on buying local and saving, check out this article from our friend The Prana Mama:  Eating Local Tips for Busy Moms on a Budget

To learn more about Ayurveda, I highly recommend Ayurveda: A Practical Guide: The Science of Self Healing, by Vasant Lad