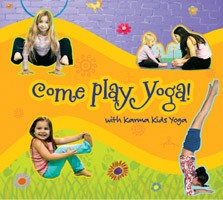 Karma Kids Yoga, a NYC-based yoga program for children and families, recently earned a Mom's Choice Award for their 2008 CD, Come Play Yoga!.  The Mom's Choice Awards recognize excellence in family-friendly media, products and services, and it was this fun, upbeat and energizing album which caught the judge's attention.  Bravo to Karma Kids!

As we described in an earlier post, "The Magic of Music," there are countless uses for music in class; engagement, adjusting the tone of the class (energizing or calming), and enhancing creativity, coordination and socialization.

Come Play Yoga! is best used as background music when a class wants to follow its own flow of poses and activities.  Most of the 15 original songs tend to be repetitive (great for kids!), communicating a single pose, phrase or idea.  Yoga games almost always require some musical accompaniment to motivate kids, and several tracks such as Like A Warrior would provide this fun, upbeat tempo.  Yoga Makes Me Happy is the perfect song to play at the beginning of class, when students are entering the studio, especially on the first day when they may be feeling anxious or shy. There is even a bit of Sanskrit on the album, as in Om Shanti and Lokah Chant, which could provide an nice segue into a yoga philosophy discussion or a Sanskrit language lesson.

Aside from Sundance, a quick-paced instructional song leading the listener through Sun Salutation, and Yoga Clock, a catchy tun with cues to speed up or slow down the pace of the "tick, tock, yoga clock," most of the songs do not specifically guide movement in a yoga class. (ChildLight Yoga's album, I Grow With Yoga, was designed with this particular purpose in mind.)   Having said that, it offers a great variety of musical styles and positive lyrics and is perfect for use as uplifting background music during class, at home or in the car. It's very easy to see how children (and adults!) might find themselves humming a familiar tune long after the CD has ended.

Besides from the peppy and inspiring title track, our favorite track on Come Play Yoga! is the soothing, visualization song, My Body of Color.  At more than six minutes in length, a child may relax into shavasana and follow the narrator's prompts for imagining a favorite color warming up each part of the body.  Although the background music is deemed a little fast for this traditional time of "chilling out," it is a simple yet thorough visualization, and certainly one in which all kids can relate to and benefit from at the end of their practice.

It's clear to us why this CD recently won the acclaimed Mom's Choice Award.  Come Play Yoga would make a wonderful addition to any family's listening library.