When you are called to serve: Jane Costello, RCYT

We recently had the opportunity to catch up with Jane Costello, a recent graduate from the ChildLight Yoga 95 Hour Certification. We have found Jane’s story of why she teaches, and how that has changed along the way, incredibly inspiring. 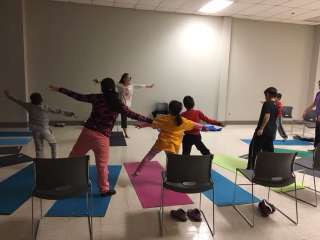 We recently had the opportunity to catch up with Jane Costello, a new graduate from the ChildLight Yoga 95 Hour Certification. We have found Jane's story of why she teaches, and how that has changed along the way, incredibly inspiring.

Why did you first become interested in sharing yoga with children?

As a teenager on Long Island in the 1980s, I volunteered one summer at a school for children with significant developmental disabilities, and my fate was sealed. I have continued to work with some of the most severely challenged students since then, and continue to love every minute of it.  I was also a dancer and a dance teacher for many years, and saw how much joy movement could bring to so many.  Yoga is a somewhat recent addition to my life, but as soon as I started my teacher training (in the summer of 2015), I knew that my goal was to find a way to marry my passions and develop a yoga program that was accessible to students with a wide range of physical and emotional disabilities.

Did you have any concerns or hesitations about becoming a children’s yoga teacher?

Surprisingly, my first concerns came while completing the Childlight Children’s Yoga Training series this summer.  I was already about halfway through my children’s certification, when on day two of a four-day training, I started to think, “What am I doing here?  I NEVER want to teach toddlers!  Am I making a mistake?”  Additionally, my children are grown and I was beginning to freak out about where I was going to find children to teach.  I was seriously re-thinking my decision to become a RCYT.

I understand that an event in your life shifted your focus suddenly. Can you share a little about what happened?

Just a few weeks before the Childlight training, one of my dearest friends passed away after a long battle with brain cancer.  Her son is one of my son’s closest friends.  I had spent a good deal of time with the family toward the end of her journey, and knew they were all struggling, and also that the son had never gone for any type of grief counseling.  I worried about him often, as did my son.

A few short minutes after my above revelation (I can’t teach toddlers!), the training turned briefly to “other” ways to use yoga, including special needs, and grief.  I felt a lightbulb go off in my head.  I went back to my hotel and spent hours researching “Yoga for Grief and Healing”, and quickly realized that this was something I could do!  I emailed a close group of friends who all have sons the same age, and who were all involved in the grieving process.  I explained my interest in providing yoga classes in my backyard for the boys, under the auspices of completing my training (which I was doing), but with the real purpose being to offer some strategies to my friend’s son to help with his grieving process.

While I now felt confident that I could put together an engaging class for these boys, my biggest concern was getting them to come!  Seven 15-year-old boys doing yoga in my backyard on a hot summer morning?  Was I crazy?  My fears were quickly allayed, however, as every mom responded and told me that all of their boys were on board.  I felt my friend guiding every step of this path.

What did you offer to this young man and his friends? 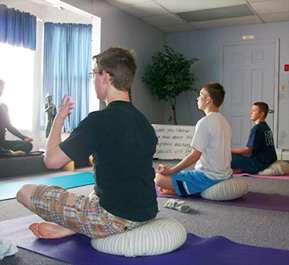 After sharing a sample class with my Childlight Yoga training group, I received some incredibly helpful and supportive advice; the most valuable of which was from Sally Delisle, who was facilitating the training. Though she didn’t say much, her advice was pointed and specific.  I planned some “beach themed/heart opening teen yoga classes”, and the boys all showed up on time and were very cooperative with my attempts at crafts (lavender eye pillows, which I said were a trial for an upcoming special needs class, but really were a wonderfully calming take home accessory J).  I incorporated partner and group poses, which they enjoyed and found more challenging than expected.  I built each class on what I thought was a strength from the week before.

How was that experience for you? What did you learn from it?

I was initially worried that the class would be either very emotional for me or somewhat awkward (did I mention teenaged boys I’d known since they were babies?)  I was relieved to find neither of these to be the case.  I felt amazing after the first class, happy, encouraged and while secretly listening to them fill out my “evaluations”, I knew that all or most got far more out of the class than they anticipated.  Many of the moms contacted me over the next few days to tell me how much their sons enjoyed the class, and were looking forward to more.  While I believe most came to support their friend, I think we all benefitted from the process.  The most amazing part, however, was when I emailed Sally after the first class to thank her for her input into the class.  Everything she had predicted would happen did, and I reacted accordingly thanks to her suggestions.  She responded by telling me that a year prior, her sister, whose name was Jane, had died suddenly, and had left behind a 15-year-old.  If there was any doubt that my friend had been guiding my path and placed me deliberately in that training, it immediately dissolved.

How did the teens receive the practice?

They were amazing.  As I said, I’ve known these boys for many years, and they are really a great group of kids.  But they worked hard to evaluate me objectively and many told me (my son included) how much harder it was than they thought it would be.  My son said he was impressed with my moves!  J  But the most incredible compliment I received was from my friend’s son as I drove him home after the last “test” class.  His aunt had told me that he delayed leaving for vacation so he could come to yoga.  As we pulled in his driveway, he said “Thanks for doing the yoga classes, I really liked them.  I hope we can do some more”.

Has this changed your vision for how you will share yoga as a teacher? How?

My primary focus remains offering yoga to children with special needs.  I do believe this experience helped shaped that somewhat differently, however, as so many of my students struggle with significant trauma in their lives.  This truly opened my eyes to a different meaning of yoga, which I hope has made me a more confident and empathetic teacher.

Do you plan to continue offering yoga and mindfulness in this specific way?

Currently I am teaching several different special needs yoga classes.  As so often happens in the world of yoga, once I opened myself up to the possibilities, opportunities literally began falling in my lap.

As a Yoga 4 Classrooms IMPLEMENT Leader and with the help of a colleague at work (a school for severely handicapped children and teens), we have implemented a daily school wide morning yoga practice. The response from both students and staff has been better than anything I could have predicted.  And while my evening Yoga for Special Needs Teen classes is nothing like I expected (it’s actually a bit crazy sometimes!), every week more students come in and go out with wide grins and big hugs, letting me know that they love it, crazy or not.

Is there anything you think people should know about offering yoga as a support for grief or pain?

Yoga has been an incredible gift to me, one that I feel blessed to be able to share with so many.  While I haven’t taught any classes to my son’s crew since the summer, I was thrilled to learn that my friend’s son recently started counseling and seems to be doing well.  It is my greatest hope that the time he shared with his friends this summer gave him a few tools to move forward and put him on the path toward healing.

Jane Costello is an RYT and RCYT in Scotch Plains, New Jersey. She is also an IMPLEMENT Leader for Yoga4Classrooms.

Yoga for the Boys

How to Get Teens to Do Yoga